As the first anniversary of Hurricane Maria’s aftermath approaches, the United States is bracing itself for yet another dangerous hurricane season. As we write this, Hurricane Florence is making its way to the Carolina coast.

Given Hurricane Florence’s fast approach and an unprecedented 12-month legacy of hurricane destruction to reflect on, we thought it would be timely to re-issue our EnergyWire post from September 29, 2017.

Before we dive in, a few crib notes on what we’ve learned and observed in the year following Hurricane Maria:

Investing in grid infrastructure is not flashy. In 2018, it seems like a stretch to imagine that many people would elect local, state, or national leaders on the sole basis of their belief in a better, more resilient grid. But as Hurricane Florence drives closer to our coast, and with Hurricanes Harvey and Maria still fresh in our minds and their combined aftermath still very present to the communities affected, we find ourselves at a poignant crossroads.

It is time to decide how, as consumers, utilities, corporations and community members, we can drive critical grid infrastructure improvements to the top of the agenda, rather than waiting for another devastating event to take its toll.

With that, let’s revisit our EnergyWire from September 29 of last year, re-posted in its original format below. We’d love to hear your thoughts on how perception of the grid has changed in the wake of these storms.

Maria’s Wakeup Call and What Your Customers Could Be Thinking... 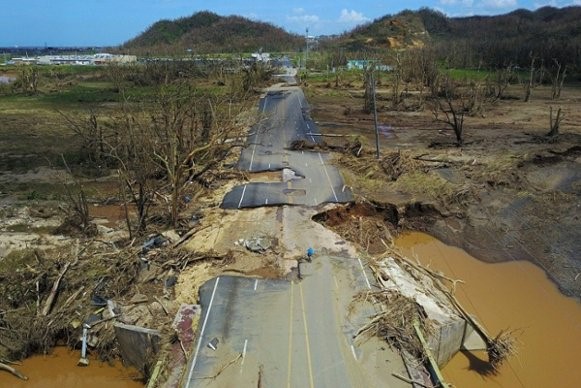 One hundred percent of the system run by the Puerto Rico Electric Power Authority is offline because Maria damaged every part of it. (Source)

When Hurricane Maria made landfall in Puerto Rico on September 20, 2017, it was lights out for the U.S. territory.

The storm was bound to cause destruction to this small island.

But it was able to create such a truly devastating humanitarian crisis only because the power grid on Puerto Rico was outdated and in desperate need of infrastructure investment.

Even without tropical storms, outages were common. The median plant age was, after all, more than twice the industry average, and most of the plants are far away from cities in hard-to-reach areas that are completely exposed to extreme weather. (Source)

The storm caused such wreckage that at this point support agencies aren’t looking at options to repair the infrastructure.

“We really should think in terms of rebuilding at this point,” says Ken Buell, director of Emergency Response and Recovery with the U.S. Department of Energy. (Source)

Maria has been a wake-up call.

It’s reminding the entire energy industry of the importance of grid resiliency and infrastructure investment.

But what about the average American?

Our guts (and a lot of past research) tell us that this is likely the first time that many Americans have ever thought about grid resiliency.

But that has us wondering...

Is Maria changing perceptions about the grid on the mainland?

Would average energy consumers want to hear more about infrastructure age and investment if energy providers communicated it to them?