A Social Media Guide to Reaching Consumers in 2023 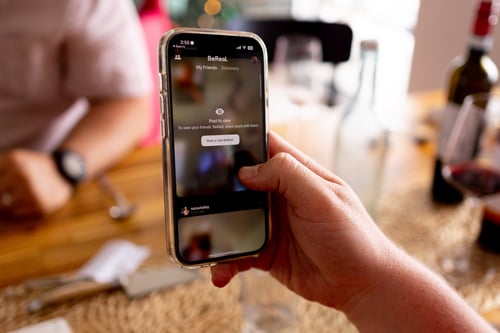 If one thing is sure about the way people consume content in the digital space, it’s change. BeReal, TikTok, the Metaverse, the Elon-rollercoaster that is now Twitter: New social platforms and new ways to engage and consume content are on the rise.

What does the ever-evolving quest to authentically and effectively reach consumers and followers mean for brands in 2023? Should brands ditch Twitter? Bet the house on TikTok? Dabble in BeReal? Or just give up on what feels like a hamster wheel of online, bite-sized social content?

You don’t have to hop on every trend. Instead, arm yourself with some knowledge about the social media landscape in 2023 and beyond; then, decide which space makes the most sense to you and your clients in terms of brand goals and the values and habits of your audience. Here’s a quick road map to the social media platforms and spaces we’re watching going into 2023.

Who’s the Audience: With 206 million daily active users (38 million of those in the US), Twitter is a major daily hub for consuming news and content, and following brands, for just about anyone and everyone. But since Elon Musk’s tempestuous takeover in late 2022, Twitter has experienced a number of controversies, issues, and a “devastating” loss of the “heavy users” who have insofar made Twitter a vibrant short-form marketplace.

The General Buzz: Controversy’s the headline. And questions: Whether Elon would buy Twitter or not (he did); whether Donald Trump and other high-profile accounts, previously banned for violent rhetoric and hate speech, would be reinstated (they were); who gets a “Blue Checkmark” (just about anyone, for $8 a month); mass layoffs (and re-hirings, and re-layoffs); and an observable tilt to the extreme right (like banning anti-fascist accounts, at the request of right-wing operatives). With all the chaos, brands have been asking themselves, why would I want to be part of this?

Brand Considerations: Twitter recalls an important lesson about social media platforms: depending on who owns them, they can change and evolve on a dime. Best not to put all your eggs in one basket.

What seems to make the most sense for brands and advertisers at the moment? Pulling back. Twitter remains important, for now. Focusing energy elsewhere can help you explore how layering other social media platforms into the advertising and content mix can improve your brand strategy and reach a wider audience.

The General Buzz: Mastodon was created as a nonprofit in 2016. It allows users to join a number of different servers run by groups and individuals, rather than a single monolithic platform-feed like Twitter or Instagram. And though it’s the very latest name in the digital space, the platform has seen significant growth as many have tapped it as a Twitter-alternative.

Brand Considerations: Mastodon is free — and free of ads. So while it’s interesting to watch it grow as a more independent, wide-open version of Twitter and other platforms, Mastodon has limits as an alternative to Twitter for brands. Could ads be coming? Watch this space.

The General Buzz: The platform’s approach is markedly different from, say, Twitter: once a day, at a random time, it alerts users that they have two minutes to take a photo of themselves and what they’re doing. The French-founded photo-sharing app has clocked 73.5 million monthly users, making it a growing power in the social media market.

Brand Considerations: Like Mastodon, BeReal is an ad-free experience. Still, brands like Chipotle and Shake Shack have jumped aboard to drop promo codes and tease product launches. The appeal here is obvious: authenticity is great branding, and the app’s intentional limitations means users and brands must, of course, be very genuine. It’s a breath of fresh air from “fake” curation algorithms like Instagram’s. But without traditional advertising, the app remains limited for brands, by design.

Users have flocked to BeReal to get away from a newsfeed overly saturated with brand content. If you’re thinking about testing out BeReal as an organization, remember, it’s not just about being authentic. What kind of true value can you add to audiences by being there?

Who’s the Audience: This Chinese social app gained rapid popularity at the height of the COVID pandemic and has continued to sustain and evolve. Today it’s first and foremost for content creators; it’s also become a search engine and news source for Gen Z and beyond. Recent stats have noted that 40% of Gen Z users prefer TikTok (and Instagram) as a search engine compared to Google, noting that the visual representation of their “search” adds significant value.

The General Buzz: Put simply, it has 1.5 billion monthly users worldwide. As Twitter and Meta have faced layoffs and wilting user numbers this fall, TikTok CEO Shou Zi Chew announced it was hiring nearly 1,000 new engineers at its Mountain View office. If you’re not on it, get on it.

Brand Considerations: If you’ve pooh-poohing an app based around trendy dances and lip sync videos, think again. TikTok has built itself into a “digital advertising juggernaut,” as The New York Times recently reported. (They also reported how two different Tiffany’s ads fared on Instagram and TikTok; on Instagram, 1.6 million views, compared to 5.2 million views on TikTok.) And with tweaks to ad performance products and direct response capabilities released in October of 2022, the future looks brighter for advertising on the platform.

That being said, TikTok is not the place for an overly finessed video campaign. For both paid and non-paid (organic) content, low-fi, “real” content native to the app is the way to go. And given its sway toward content creators, TikTok is also the prime platform for collaboration. So before jumping in, do a little research: which creators are your audiences engaging with? Is there an authentic way to partner with the same, or similar, creators to help provide genuine third-party or peer-to-peer credibility?

Who’s the Audience: Facebook’s rebrand looks to guide Zuckerberg’s users (all 3.71 billion of them) into a much larger space: the “metaverse.” What exactly this is at the moment is hard to explain. As WIRED recently put it, it’s either “the future of the internet. Or a video game. Or maybe a deeply uncomfortable, worst version of Zoom.” The idea includes a digital world where users have virtual clothes they paid real money for, among many, many other things.

The General Buzz: Financially, at least, the signals have not been good. Meta laid off some 11,000 employees in recent weeks, and experienced major revenue and net income decrease in 2022. It’s clear the platform will need a long runway if it is to succeed — no surprise, given Zuckerberg’s all-encompassing vision for a world of online socializing and shopping.

Brand Considerations: Right now, the Metaverse still feels too vague and complicated for most brands to work into their main communications strategy. But it may be important in the future — and, if alternate reality branding spaces gain users and traction, advertising here could be a natural pairing. Brands should take note of how the Metaverse and other platforms mainstream AR technology — and how users respond.

As this roadmap shows, marketers have many tea leaves to read on the social media marketplace. As new platforms expand — and old ones change — remember that hopping on every trend won’t pay off. Stay informed, dip your toes in many waters, and make smart decisions based on your clients, brand goals, and, most importantly, audience habits in 2023.