In Vermont, nearly 30 percent of residents have experienced food insecurity since the start of the pandemic – up from one in 10 pre-pandemic – but they aren’t seeking public assistance. Many people either don’t know they qualify for help or are struggling to get past the stigma of asking for it.

To help break down these barriers, we worked with the Vermont Foodbank and Hunger Free Vermont on a new, integrated campaign conveying a simple, but poignant message: everyone deserves a bite. In addition to breaking down the misperceptions around receiving assistance, the campaign was also designed to make more Vermonters aware of federally funded programs, like 3SquaresVT, which exist to ensure that all who are in need are able to put food on the table for their families.

The resulting visuals offer a unique first-person point of view, illustrating poignantly that hunger doesn’t discriminate. The impactful imagery was brought to life in partnership with TheOrangeApple, a photography studio in Vancouver, showing two different hands in a way that made it feel like it was one person eating, a creative strategy intended to forge an unexpected bond of unity and togetherness. By mixing the arms and hands of the consumers holding Americana food at their kitchen tables that could be in Anywhere, USA – it is made clear that people of all ages, genders, and colors are impacted by food insecurity.

In designing the campaign, we needed to communicate an overarching awareness message of the 3SquaresVT food assistance program and incite participation, really hitting on the insight that many Vermont residents of all walks of life (especially during the pandemic) are currently unaware that they may qualify for the program. It was key that our message help to de-stigmatize the idea of who needs and qualifies for the assistance, as the number of Vermonters that qualify is currently far greater than those that actually enroll. Lastly, we needed to drive home the fact that, the more residents that receive this federally funded help, the more the state of Vermont, the local economy and farmers benefit.

Keeping that “all in this together” mindset at the core of the campaign also allowed us to lean significantly into channels that were highly community driven, such as local newspapers and radio stations throughout the state. The state of Vermont is largely rural, and we knew the standard digital channels alone weren’t going to cut it if the campaign wanted to truly reach everyone in the target audience.

A significant portion of the budget for the integrated campaign was channeled into high-impact full page spreads in community newspapers, a tactic that enabled us to physically put the campaign’s resonant messaging in the laps of audience members via a medium that individuals often engage with while consuming a meal. In doing so, we were able to present audiences with a visually arresting advertisement, addressing a real and present issue affecting thousands of neighbors, friends and community members.

Toolkits for stakeholders and local community partners were also developed, providing educational resources, talking points, social media posts and opportunities for the many organizations working together to fight food insecurity to elevate and increase the impact of the campaign far and wide.

Check out the full campaign below: 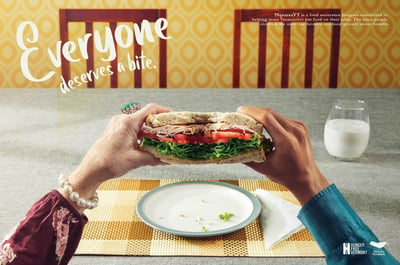