On the CPP, A Sustainable Future, and Hope

The future is sustainable, with our without the White House.

The Clean Power Plan was introduced in 2015 by President Obama, who called it "the single most important step that America has ever made in the fight against global climate change."

The EPA estimated that the CPP would help to protect the most vulnerable among us, including children, seniors, the sick, and those living in poverty, as well as future generations from the dangers of air pollution.

And the results weren't just platitudes.

And this week President Trump signed an executive order instructing the EPA to rescind the Clean Power Plan.

This may seem like a devastating blow to energy efficiency, sustainability, and the environment.

In fact, this act has been referred to as "signing earth's death warrant".

But there is power in a movement.

And momentum is everything.

So let's look at some of the ass-kicking responses to the executive order that have happened over the past week and celebrate the boldness, braveness, and leadership of some of these organizations and individuals.

1. The Coasts Lead: With the announcement of the executive order, Governors Andrew Cuomo of New York and Edmund Brown Jr. of California issued this joint statement about their commitment to a sustainable future.

In it they say;

“Together, California and New York represent approximately 60 million people – nearly one-in-five Americans – and 20 percent of the nation’s gross domestic product. With or without Washington, we will work with our partners throughout the world to aggressively fight climate change and protect our future."

3. Walmart keeps their word:“This work is embedded in our business,” Wal-Mart spokesman Kevin Gardner said in an email. It’s “good for the business, our shareholders and customers; if ultimately we are able to positively impact the environment in the process, that’s a win too.”

5. ExxonMobile encourages the White House to remain a part of the Paris Climate Agreement

And utilities are gearing up for a cleaner future as well.

The results of a  Utility Dive  survey “indicate that utilities expect to source more power from renewables, distributed resources and natural gas in the coming years, while coal continues to decline.” 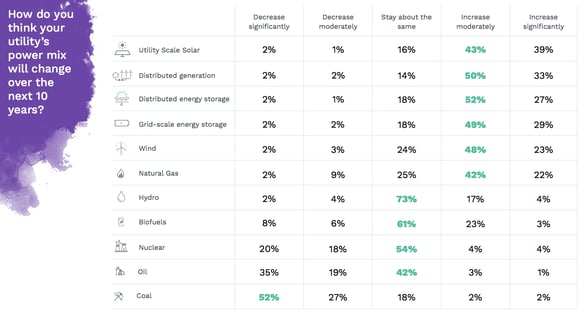 The outlook of utility executives on the future power mix Credit: State of the Electric Utility 2017

The future of the Clean Power Plan may still be uncertain.

But it looks like the free market and the utilities will lead the US into a cleaner energy future that the rest of the world is committed to.

And KSV will be here the whole way.