In marketing, mobile is the new black 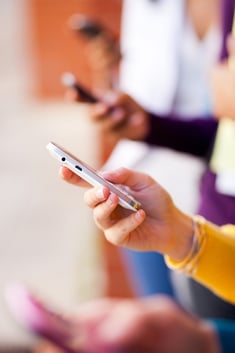 We know mobile devices are much more than phones. They’re increasingly used to occupy every moment of free time. Riding on a train? Waiting in line? Have five minutes in between meetings? Your phone is probably in your hands, and you’re probably refreshing your newsfeed, tweeting what you had for lunch, and catching up on the latest news.

Mobile is not the next big thing; it’s the now big thing. A recent study by the Pew Research Center found a whopping 91% of American adults have a cellphone, more than half of which are smartphones (just two years ago, only 35% of cellphones were smartphones).

As consumer behavior changes, so does advertising. Recently, there’s been a 111% increase in mobile ad revenue in North America, according to an IAB report. Marketers that capitalize on this surge of mobile usage, and forge emotional connections with consumers, will prove to be the most successful.

So who will win the mobile ad race? Surprisingly, Facebook is emerging as one of the leaders. The social networking company just announced that mobile composes 41% of their total ad revenue, up from nearly zero just one year ago. “Soon, we’ll have more revenue on mobile than desktop,” said CEO Mark Zuckerberg.

Forecasting and reflecting emerging trends is obviously crucial in today’s technology-driven world. Who do you think is doing a good job of capitalizing on mobile use?