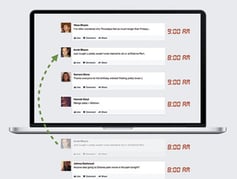 Last week, Facebook announced a series of changes to its News Feed algorithm that will alter how and when stories appear to users, marking the company’s first efforts to pull back the curtain. They've dubbed the two major additions “Story Bumping” and “Last Actor.” The first aims to bump engaging content a user may have missed to the top of the News Feed later in the day, and the second analyzes the last 50 actions of a user and works to rank stories accordingly.

For example, let’s say a close friend announces their engagement via Facebook on a particularly content-heavy morning. Prior to the introduction of Story Bumping, their post would have been buried under more recent updates from other friends, pages, and advertisers. It would have been up to you to scroll down far enough to unearth it. Now, in an effort to show you the content you want to see, Facebook will bump this story to the top of your News Feed, even if you don't log on until much later in the day.

Last Actor is similar to Story Bumping in some respects, but is less of a second chance for content and more of a smart filter. By examining your last 50 actions (likes, comments, and shares), this feature ranks new content based on what it deems most relevant to you.

Now, users can fine-tune what’s displayed on a rolling basis. Like almost all of a friend’s status updates? It’s likely you'll be seeing more of them appear at the top of your feed. Manually hide the filtered photos of wilted salad your coworker posts everyday at lunch? Facebook will take the hint.

While Facebook was quick to state that these changes do not impact the way paid content appears in feeds, organic content will be affected, especially for brands. With the introduction of both Story Bumping and Last Actor, organic brand content is given a second opportunity to be served in fans’ feeds.

At first, this may appear as a freebie for brands. But it’s important to consider that although Facebook has put the infrastructure for increased visibility and engagement in place, it’s not guaranteed. The onus for quality content still falls solely on a brand.

Now more than ever, it’s important for brands to craft content with fan engagement in mind. While Facebook now gives all content a second chance, mediocre updates will still fall flat (that is, unless they’re promoted).

How do you feel about Facebook’s adjustments to News Feed? Have you noticed a change in the quality of content?