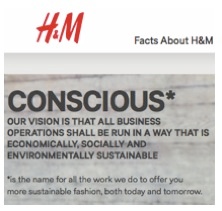 Guest Blog Series: Jeffrey Hollender, Co-Founder, Seventh Generation
Editor’s Note: Over the next few months, longtime KSV friend and collaborator Jeffrey Hollender will be lending his voice and perspective to our blog. He’ll share his positions and musings on corporate responsibility, sustainability and social equity.

Why would the CEO of a successful fashion giant want to increase wages when their costs rely on that very thing being low?

There are a few opinions on the matter.

Per Grankvist of CSRwire praises Mr. Persson as a “CEO turned activist” and hails Persson as a pioneer who hopes to change the entire retail industry by calling for fair labor rights and increased efficiency. In the alternative, he notes, the supply chain could easily move to a country with less expensive labor.

In contrast, Anna McMullen of the Clean Clothes Campaign believes Persson’s goal was to “greenwash” the public and called it a PR stunt. She writes:

“Persson went to that meeting knowing that he represents just one brand – a powerful buyer admittedly, but still only one brand in Bangladesh. When governments set the minimum wage in their country for the garment industry, they have to think about their international competitiveness, and are all too aware that [multinationals] will move their production elsewhere if labour costs go up…brands like H&M must be the ones who go first and work with their supplier factories to achieve wage raises. In time, with enough brands doing it, governments may have the confidence to raise minimum wages.”

The garment industry in Bangladesh is booming. According to a recent McKinsey study, Bangladesh is preferred over other countries because of its strong performance in the criteria of price and capacity and because of favorable EU trade agreements. While buyers enjoy these perks, the study also states: “[W]ithin the next three years, both CPOs and suppliers expect a labor cost increase of about 30 percent.” All stakeholders expect wages to increase and most CPOs actually see it as a good thing.

The current low wages attract less educated workers and high turnover rates that negatively impact the efficiency of production. Importantly, the retail industry is demanding more sophisticated output from suppliers such as outerwear, tailored products, ladies intimates, and functional clothing. To achieve this demand, manufacturers will need to ensure the supply of skilled workers by increasing wages. In fact, to overcome barriers to the growth of the Bangladesh garment industry, McKinsey recommends that buyers actually try to increase wages. Download the McKinsey study here.

With this background, was Mr. Perrson out to improve the labor conditions in Bangladesh, or was he just thinking about his bottom line? While a CEO can certainly do both, it’s always worth taking a step back to analyze the underlying motives for these socially responsible initiatives.