In the Soul of Seoul: On the Frontline of Corporate Responsibility in Asia 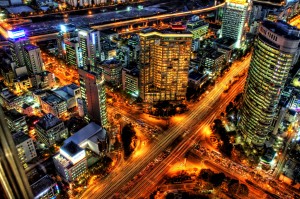 Guest Blog Series: Jeffrey Hollender, Co-Founder, Seventh Generation
Editor's Note: Over the next few months, longtime KSV friend and collaborator Jeffrey Hollender will be lending his voice and perspective to our blog. He'll share his positions and musings on corporate responsibility, sustainability and social equity.

I traveled halfway around the world to keynote The First Corporate Social Responsibility International Forum ever held in Korea.

Having never been to Korea, I’d like to share a little about the country and its culture.

Korea is at the same time a new and an old culture. The decimation that occurred during the war left little of the country’s history intact, thus much of what can be seen in Seoul was built in the last 50 years.

The city is clean – it reminds me of Toronto – with no garbage and, amazingly, almost no garbage cans. Shopkeepers wash store shelves and even doorframes daily. The culture is conservative; it’s almost impossible to capture someone in your glance. There are virtually no short skirts or low cut tops on women in the downtown business district.

Korea has a rich legacy-based spirituality. Historically, its founding philosophy was “Hong-Ik-In-Gan (弘益人間): benefiting all humankind widely.” “Gong-Dong-Che (共同體): Community,” is a second cultural concept that has shaped the Korean culture. These ancient beliefs live in tension with the explosive growth and development of the countries highly successful multi-national companies.

In 1960, in the aftermath of a devastating war, South Korea was one of the poorest countries in the world, with an income per person on a par with the poorest parts of Africa.

During the 1970s and 1980s, the South Korean government took charge of distributing limited resources to promising industries. Without intense government involvement and large family-led conglomerates, known as Chaebols, it’s unlikely that the economy would have recovered so quickly. The Chaebols’ economic influence was quite strong during the 1980s and 1990s. Sales at the top five Chaebols stood at 21% to 23% of the total economy; for the top 30 Chaebols, this number reached around 40%.

By the end of 2011, it had become richer than the European Union average, with a gross domestic product per person of $31,750, compared with $31,550 for the EU. South Korea is the only country that has so far managed to go from being the recipient of development aid to a country that distributes significant amounts of aid.

South Korea, unlike many of its neighbors, has combined growth with democracy. Korea scores the same as Japan in the democracy tally kept by Freedom House. No other Asian country does as well. At the same time, Korea has combined growth with equity. Its Gini coefficient – a measure of income inequality – was 0.31 in 2010, just a bit worse than Scandinavian countries, but a bit better than Canada.

Korea was hard hit by the 2008–2009 global financial meltdown. In addition to losing millions of jobs, foreigners withdrawing over $1.1 billion from the stock market, and a currency that fell 10% by 2010, Korea’s GDP was growing at 6%. In 2011, it was close to 4%, with the unemployment rate at an amazingly low 3%. Certainly it’s true that some of the recovery is the result of Korea’s significant dependence on the Chinese economy. But China’s GDP per person would have to grow at 7.5-8% a year for 20 years to reach the heights Korea has already scaled.

What’s the secret to Korea’s success? The answer almost everyone here will give you is education and hard work. Koreans work on average 2,200 hours a year, half as much again as the Dutch or Germans. Their reaction to the 2008 slump was to work harder still. During the 2009-10 recovery, reckons Richard Freeman of Harvard University, Korea had the second-largest increase in hours worked in manufacturing, after Taiwan.

Korea’s focus on corporate responsibility emanates both from its own culture as well as the requirements imposed on a country whose economy is based on exporting 50% of what it makes. CSR is in a relative early stage of development, with large multinationals like LG and Samsung competing well with other multinationals, yet corporate governance, transparency, tolerance for dissent, and labor rights are in a much less well-developed state.