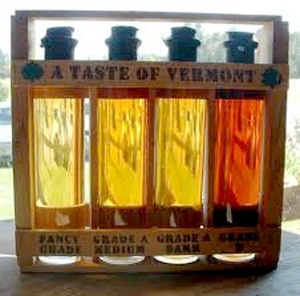 Cold nights. Warmer days. The maple sap in Vermont has started to flow.
A decidedly low-tech industry, “sugaring” takes advantage of gravity as the primary force used to collect the sweet sap that gets boiled down to make maple syrup. Any Vermont schoolchild can tell you that it takes approximately 40 gallons of sap to make just one gallon of syrup, which means a lot of fuel is needed.

Maple sugaring and energy efficiency come together in a process called reverse osmosis. By removing water from the sap before it’s boiled down to syrup, much less energy is needed. In December, the United States Department of Agriculture’s (USDA) Rural Energy for America Program (REAP) announced grants to six maple syrup producers – five in Vermont, one in Michigan – to make their operations more energy efficient using reverse-osmosis equipment.

Although the season has just begun, the grant recipients are enthusiastic about the 2012 sugaring season.

Eric Remick of the Sweet Stone Maple Farm in Hardwick, Vermont hopes for a 75 percent reduction in his fuel costs.

In 2011, Remick used 20 cords of wood to boil his sap into syrup. This year, taking advantage of reverse osmosis, he hopes to use just five cords. That roughly translates into a $3,000 fuel savings – a pretty significant sum for a farmer in Vermont’s Northeast Kingdom.

Most Vermonters insist on eating only Pure Vermont Maple Syrup, and many are pretty particular about the color or grade of syrup they consume. What’s your favorite grade? Grade A Light Amber (”Fancy”), Grade A Medium Amber, Grade A Dark Amber, or Grade B?